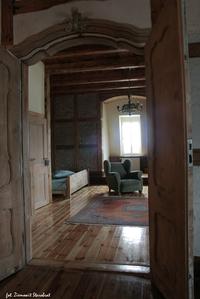 Palace - Restaurant "Smyrna" in Kowary for sale
Kowary
Kowary
Owner (direct offer)
sale procedure underway
castle, palace, court
0.155 ha
932 m2
2
+ attic
1
15
1746
Palace - Restaurant "Smyrna" is located in the center of Kowary. It is an excellent starting point in the Karkonosze Mountains and picturesque Rudawy Janowickie, from where it is close to Karpacz (5 km), Szklarska Poręba, Jelenia Góra and Cieplice, where there are many ski slopes with lifts and numerous tourist attractions.

The building is based on a rectangular plan with a compact body, covered with a high hipped roof with decorative dormer windows. From the front the top is decorated with a triple top. On the ground floor, inside there is a spacious hall covered with four spans of the cross vault. The first floor was reconstructed except for a corridor closed by a ceiling with a facet, decorated with a frame ornament. The original equipment includes doors on the first floor, all from the 1820s, surrounded by richly profiled frames.

Through Kowary, there are important communication routes from Jelenia Góra to Kamienna Góra and Wałbrzych as well as to border crossings with the Czech Republic on the Okraj Pass (about 10 km) and in Lubawka (around 20 km). At a distance of 80 km there is a border crossing with Germany.

History of the Palace in Kowary:
The owner of the facility was certainly a rich patrician. Analysis of architectural details, as well as the interior decoration indicates the creation of the palace took place in 1820s. The author of the palace design could be a builder from Jelenia Góra or Cieplice, where at the same time stylistically similar objects were created, such as the Zieten Palace. The first iconographic representation of the palace appeared in the well-known cartoonist Friedrich Bernard Wernher around 1746 on a schematic plan, and on the Kowary plan from 1746. Later, the palace was probably purchased by the owner of the plush factory (transformed in 1856 in the Carpet Factory). As such, it is confirmed on the city plan from 1888. During this period it underwent a major renovation. At the end of the 19th century, the area was fenced, and the window frames and external doors were replaced. In the 1920s, the palace was owned by Wladymir Rouch - the director of the factory, and later in the years 1927-1936 by Alojzy Heschke - the master of the factory engine room. Until the end of World War II, the director of the plant, Henryk Goriss, and his family lived in the palace. After the war, the palace served as a health clinic, and from 1998 it was purchased and re-equipped by the present owner for a private Smyrna hotel.
2,600,000 PLN